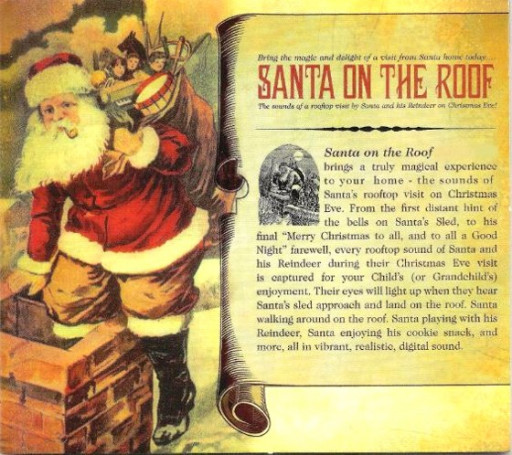 Santa on the Roof

25 years ago, Macadins Company created and released a recording of what it might sound like to hear a magical rooftop visit from Santa on Christmas Eve. This recording has become a holiday tradition for many families and in its 25th year of production, "Santa on the Roof" is easily downloadable to any Computer, Tablet or Cellphone and is certain to continue rewarding listeners with joyous memories of Christmases past and present. "Santa on the Roof" is available for purchase and download now at www.santaontheroof.com.

Your child will hear Santa's sled landing with a thump and gliding to a gentle stop. His footsteps as he walks around the roof, his playful antics with his team of Reindeer and of course Santa enjoying his cookie snack left by the children. And more.

An introductory story sets Santa's visit not as a true recording but as a storybook-like magic fairy tale that took place long-long ago, thus preserving the Santa legend and mystique. This story also allows "Santa on the Roof" to be played for a child anytime during the Holiday Season. More adventurous adults start the recording after the story and get somewhat creative late at night on Christmas Eve.

For 25 years, parents have been able to provide their children with a magical Christmas Eve rooftop visit with "Santa on the Roof." Watch and enjoy your child's eyes twinkle and dance in delight with awe as their dream to hear the sounds of Santa unfold for the very first time.

This Christmas season capture the magic and wonder of Christmas as you share a very special childhood moment with your children. Celebrate memories of what was and help keep alive a historic and delightful Christmas tradition that is as enchanting and awe-inspiring as the event itself.

Feedback from customers is always sincere and heart-warming with one customer commenting they played it at midnight through hidden speakers and their kids were at the window screaming they saw Rudolf's red nose. Another stated they played it at 2 am as an excuse to go downstairs and get the skis Santa had left him. And finally, an elderly Lady ordered "Santa on the Roof" because she always wondered what it would sound like to hear a sled landing on her roof.

For anyone who loves the Santa tradition and wants to share it with their child or grandchild this recording is a must have.

Macadins is a mail order company headquartered in Wethersfield, Connecticut and has been in business since 1997.