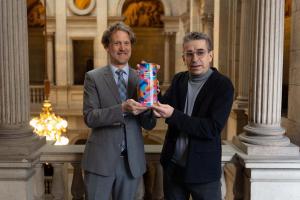 At a ceremony in Barcelona, Helfried Carl, Founder of ECoD, presented the European Capital of Democracy award to Deputy Mayor Jordi Martí after Mayor Ana Colau was taken ill. Copyright: Elias Pargan, free for editorial use.

Following a vote by several thousand members of a pan-European citizen jury, Barcelona will host a year of events dedicated to strengthening European democracy.

VIENNA, AUSTRIA, January 19, 2023 /EINPresswire.com/ — Barcelona has been awarded the title of European Capital of Democracy 2023/24. The result was announced at a press conference in Barcelona on Wednesday 18 January. From September 2023 until August 2024, Barcelona will host a Programme Year of events and activities to strengthen European democracy, organised in cooperation with partner organisations and citizens, with visitors from throughout Europe invited to participate.

‘Local government has always been the level of public authority closest to the people it serves,’ said Marija Pejčinović Burić, Secretary General of the Council of Europe in a video message of congratulations to Barcelona. ‘It is here that new ideas and democratic participation are best placed to flourish. The European Capital of Democracy not only recognises excellence but holds it up as an inspiration to others.’

In a separate video message, Vice-President of the European Commission Dubravka Šuica highlighted the urgency of the initiative in these uncertain times: ‘After a decade of multiple crises and attacks on our European values, it is time to join forces, fight back and connect the democratic innovators and change-makers of our time. The European Capital of Democracy will create a vibrant stage for democratic best practice exchange and for experiencing new forms of democratic innovation in action.’

Between 2 and 15 January, several thousand citizen jurors from 46 Council of Europe member states assessed a range of projects by three finalist cities, Barcelona, Braga, and Brussels. Barcelona convinced the jury with its wide range of innovative projects, including Decidim, a digital citizen participation platform the city developed in 2016 and now in use by hundreds of cities around the world; and Superblock, an initiative to reclaim the city’s streets from cars.

‘The City of Barcelona is proud to be the first European Capital of Democracy,’ said Mayor of Barcelona Ada Colau. ‘In a global context where hate speech and authoritarian projects are on the rise, cities are the place where we can work together with citizens to strengthen democracy. We embrace this challenge as an opportunity to make further progress in democratic innovation, to cooperate with other cities, and to ensure that neighbours have a more active role in public policies.’

Antonella Valmorbida, Secretary General of ALDA and Chairwoman of the ECoD Experts’ Jury highlighted the strength of all three finalist cities: ‘Brussels has been experimenting with ways to get feedback from the community before they introduce lasting changes. Barcelona is an innovator, embracing both new digital models and in-person participation. Braga’s model of Connective Intelligence Democracy seeks perspectives from experts in a wide range of fields, building on the value of openness.’

Helfried Carl, Founder of European Capital of Democracy, added: ‘This is a crucial moment for European civil society and European democracy alike after more than two years of hard preparation of this initiative. The selection of Barcelona provides us with a great platform to showcase best practice in participation and to prove that democracy delivers for European citizens.’

You can access our press pack here, with a full press conference video, video messages, and additional photos.

Important Note: In February 2023, the call will open for cities to apply for the next title of European Capital of Democracy (ECoD 2024/25). Click here to find out how your city can apply.

The European Capital of Democracy initiative was launched in December 2021 by ECoD gemeinnützige GmbH together with The Innovation in Politics Institute, based in Vienna and Berlin with partners in 16 European countries.

For more information about the European Capital of Democracy, please visit:
https://capitalofdemocracy.eu