IN by David Helpling is a double album of electronic music, available in a wide array of formats. 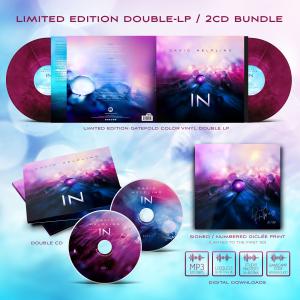 The Complete Limited Edition Bundle for IN, on Bandcamp and SpottedPeccary.com

IN is an electronic, melodic album offered in a wide range of formats including a Complete Limited Edition Bundle with double vinyl, signed artwork, and more.

Cosmic energy is at play. Helpling seems to be communicating with worlds far beyond ours.”

PORTLAND, OR, USA, April 15, 2022 /EINPresswire.com/ — David Helpling, a California-based musician, recording artist and film composer, has released IN, a new double album exploding with the power of subsonic drums, pulsing synths, searing textures and ethereal vocals. Years in the making, IN delivers a generous 90 minutes of music in a broad choice of formats: color vinyl double LP, 2x CD, and choice of downloads in 24-Bit/96K HD Studio Master, standard MP3 (320KBPS), or 16-Bit CD quality. There is also a COMPLETE LIMITED EDITION BUNDLE available while supplies last on Bandcamp and the Spotted Peccary website at https://spottedpeccary.com/shop/in/

Before Helpling released his trilogy of epic ambient collaborations with Jon Jenkins, before his shimmering guitar records A Sea Without Memory and RUNE — he had an idea that would evolve to become IN. It was inspired by the tiniest of places, when one square inch of forest holds a world of color and life, when a shard of lichen is a monument, a twig a skyscraper, an arm’s length a universe. What would that SOUND like? Helpling is an artist with a great sense of wonder, and IN captures the exploration of that magic space, as well as inspiring deep listening and introspection about ourselves.

Helpling embraced collaborations for IN, and wielded an impressive array of instrumentation, studio gear and synth on the album, including ambient guitars, the Sequential Prophet 6 Analog Synthesizer and the Waldorf Iridium Digital Polyphonic Synthesizer, and a 1981 Yamaha CP70 Electric Grand Piano, which summons a classic yet fresh organic sound. Matthew Schoening’s electric cello enchants on the track “You Already Are.” Famed Adiemus vocalist Miriam Stockley lends her rich, ethereal vocalizations to “Slipping” and “I Too Am Coming Home,” and multi-instrumentalist Benjy Wertheimer plays the Esraj, an expressive bowed instrument from India on “The Bliss You’ve Always Carried.” Vocalist Nidhi Bhatmuley gives a soaring performance on the post-rock flavored “This Burning Sky,” an emotional epic that evokes Hans Zimmer’s work with Lisa Gerrard. Through these significant contributions, Helpling has realized a macro-focus on his contemplation of life.

“A lot of attention was paid to detail, mixing and mastering the highly emotive music,” observes Bert Strolenberg of Sonic Immersion. In the New Age Music Guide, BT Fasmer adds that “IN is an exploration of that magic space: an expanse of delicate subtlety and minuscule vibrancy that suggests a poignancy of existence itself,” and a music review in The BEING Blog notes “Cosmic energy is at play. Helpling seems to be communicating with worlds far beyond ours.”

The visuals call for stunning music videos, and Helpling says he has at least three planned for the rollout. Johno Wells directed the first single’s video, “Waves Dream of Breaking,” and Helpling released an enigmatic teaser for “This Burning Sky.” Spotted Peccary’s official album video (below) shares music clips and a preview of the physical CD.

On March 16, Ambient Zone held a Sessions Video Release Party, an 55-minute interview with Helpling discussing the project, which can be heard at https://www.mixcloud.com/ambientzone/sessions-002-interview-with-david-helpling/

Helpling is available for media interviews and commentary on all things music, production and sound design. Please contact [email protected] with media requests.

3 Only What’s Been Taken

8 The Cold Distance Between

11 Bending Towards the Night

Specializing in ambient music and electronic music, David Helpling’s early solo releases include his debut, Between Green and Blue, and Sleeping On The Edge Of The World, both released on Spotted Peccary Music. His celebrated collaborations with Jon Jenkins have so far resulted in a trilogy of albums: Treasure, The Crossing and Found. RUNE continued his solo journey into ambient guitar explorations of new places under the sea. His new album, IN, is a return to his multi-instrumental style; it is an epic take on the infinitesimal and the infinite, rich with vocal and instrumental collaborations featuring Miriam Stockley, Nidhi Bhatmuley, Matthew Stewart, Benjy Wertheimer, Matthew Schoening.

IN: The Official Preview