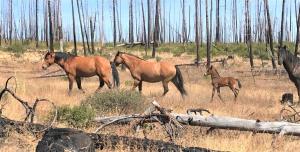 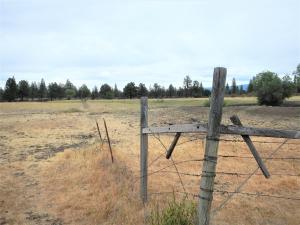 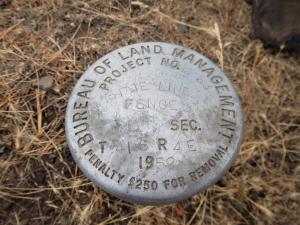 This survey marker was on the downed state fence line, just one are of many downed, missing and damaged areas of fencing around the Pokegama HMA 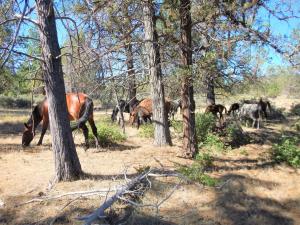 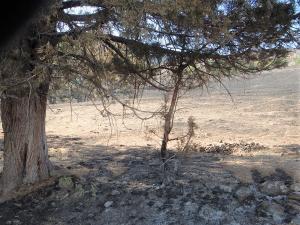 Horse droppings near a Juniper tree used by wild horses for shelter has survived a castrophic wildfire. The horses removed fuel under the tree and scratched-off the low limbs (aka: fire-ladders) making the tree fire-resistant

Based upon a records search, we believe the BLM has not conducted the required determination of excess animals on the Pokegama HMA, which is required by federal law and policy”

YREKA, CALIFORNIA, UNITED STATES, September 16, 2022 /EINPresswire.com/ — The Bureau of Land Management (‘BLM’) has been very busy as of late, including in Oregon and California, rounding up native species American wild horses.

The BLM has been and continues to run-around western states that are being incinerated by wildfires and spending $-millions in tax-dollars rounding-up some of the last large-bodied herbivores that were helping to reduce wildfire fuels (grass and brush).

The BLM managed Pokegama wild horse Herd Management Area (HMA) is one such area in southern Oregon being targeted by the BLM for the removal of wild horses according to a September 7, 2022 article in the Herald and News:

This is an area with a collapsed cervid (deer & elk) population that is also at risk for Chronic Wasting Disease (CWD). Interestingly and of great importance is that unlike cattle, sheep, humans and cervids, wild horses are resistant to CWD.

CWD is 100% fatal in cervids, cattle, sheep and humans. Moreover, wild horses are believed to control the vector for the CWD pathogen according to a leading CWD researcher, Dr. Mark Zabel at the Prion Research Center in Ft. Collins, CO.

In the Oregon Pokegama wild horse Herd Management Area, which is 80,000_ acres, the BLM absurdly manages wild horses with what they call an ‘appropriate management level’ (AML) of 30-50 total wild horses in the herd.

As science teaches, with a population being artificially manipulated and kept so low, managing wildfire fuels is impossible for so few horses.

Additionally, such a low population of horses guarantees inbreeding and genetic defects as a result.

All of the reliable published science, including the BLM’s own experts say that a minimum (floor) of 150 breeding adult horses in a herd is required to maintain the genetic diversity and vigor of the horses.

The area on and around the Pokegama HMA has already burned catastrophically during the 2014 Oregon Gulch Fire that incinerated 32,000 acres across Jackson and Klamath Counties in Oregon. (See Pokegama Image showing incinerated trees).

Assuming the higher BLM AML of 50-horses in that herd, the population distribution over that massive 80,000+ acres landscape is just one horse for every 1,600-acres.

We also know from a published 5-year study of wild horses in that region, that in addition to helping mitigate wildfire, wild horses offer numerous benefits to the ecosystems where they live.

In the process of the 2014 Oregon Gulch wildfire incinerating about 32,000 acres of pristine forest, wildlife and habitat, some of the Oregon-California state-line fencing, as well as private lands fencing (nearly 100-miles of fencing in total) was damaged or destroyed. (SEE IMAGES)

As a result of these now missing and damaged fences and gates, which have not been repaired even though county and federal agencies have been advised in writing (with photo evidence), the area is extremely porous to livestock grazing on designated open range lands.

This means that all livestock, including cattle, sheep and horses, can now wander onto private lands, where fencing is missing, damaged or ineffective, through no fault of the livestock or their owners.

To be clear; private land owners with lands near or adjacent-to designated open range have the legal obligation to fence-out any unwanted animals from their private lands, and to maintain that fencing to statutory specification (a ‘legal fence’).

Green Diamond Resource Company (‘Green Diamond’) is a private land-owner in the area of the Pokegama wild horse Herd Management Area, as well as having land in that area that is near or borders designated open range grazing lands.

Much of the fencing around Green Diamond’s private lands was damaged or destroyed by the Oregon Gulch Fire, and remains in disrepair.

Green Diamond has complained to the BLM Klamath Falls Office, saying that horses are on their lands, and have requested that the BLM round them up.

The BLM has stated they intend to comply with the Green Diamond request and engage in a bait and trap operation.

“We believe and will legally assert, among other claims, as needed, that the BLM does not have any right to act in behalf of the private land owner in this case with Green Diamond Resource Company, in regard to trapping or taking up any livestock, horses or not, from their private lands”, said Professor Michael R. Harris, Legal Advisor to the California-based non-profit organization Wild Horse Fire Brigade.

Counties, farmers and livestock producers need to pay close attention to this matter because they all have something to lose.

If Green Diamond and the BLM are allowed to carryout what is arguably an illegal taking that is in conflict with established livestock open range laws and policy established to protect the livestock industry, then that sets a very dangerous legal precedent for livestock (cattle and sheep) producers that may also find their livestock being trapped or rounded-up for trespassing on someone’s improperly fenced private lands near an open range.

“We are extremely concerned about these ill-advised roundups of native species American wild horses, as well as BLM’s reckless approach and disregard for a significant body of published science that argues against the BLM’s removal of wild horses from public lands” said Deb Ferns – President of Wild Horse Fire Brigade.

Shockingly, the BLM is removing wild horses at the very time when we desperately need millions more native herbivores, like wild horses across the western landscape, not less.

The big question many people have is this:

Why on earth would any logical-thinking person, let alone a taxpayer-funded government agency, remove thousands of native species herbivores that are known in science to reduce wildfire fuels, even as catastrophic wildfires are getting worse year-over-year? .

The BLM’s actions on the landscape are arguably enhancing conditions that support more frequent, larger and hotter wildfires; here’s why:

According to CALFIRE’s handbook, small flashy fuels that are one-quarter of an inch in diameter or less, such as grass and brush, are known as one-hour class fuels. These flashy fuels burn exceptionally fast and hot. They ignite easily, and without any other fuels present are fully capable of incinerating entire communities as we have seen time and time again. Due to climate change, these flashy fuels dry sooner, and stay dry longer, enhancing the odds for ignition by natural or man-caused events.

These missing deer had previously been abating approximately 3-million tons of annual grass and brush just in California and Oregon.

That massive tonnage of annually recurring wildfire fuel is now subjected to longer, hotter summers resulting from climate change, making these prodigious fuels more volatile over an extended period of time. The result is a perfect setup for the evolution of the more frequent, abnormally large, super-hot wildfires that we are now experiencing.

Wildfire forensic data over the past 5-years from InciWeb shows that over 80% of catastrophic wildfires in Oregon and California involve ‘grass and brush’ as the key fuels.

An example of that data was reported by the USFS in regard to the recent McKinney Fire, that devastated over 60,000 acres of remote wilderness, which resulted in disastrous post-wildfire erosion and a debris-flow that killed tens of thousands of salmon, steel-head, trout and other fishes and aquatic life in the Klamath River.

Grass and brush fuels are well-known to kindle fire, burn extremely hot, and carry fire to other heavier fuels and structures, and happen to be the natural forage for native species American wild horses.

The reduction these fuels is a very effective method for the reduction of ignition and spread of wildfire, and is accomplished naturally, year-round by native herbivores, such as the wild horses.

It will require many decades of greatly improved wildfire management to reestablish the collapsed deer populations in California and Oregon.

This is because horses don’t digest the seeds of the north American native flora (grasses and plants) they eat. In fact, via the 1.8 million years of co-evolution between north American wild horses and flora, horses actually complete the life-cycles of the grasses and plants they eat by naturally reseeding through their droppings.

Scientific studies prove that; unlike cattle, sheep and goats that as ruminants digest all the seeds they consume, horses pass most of the seeds they eat onto the landscape in their droppings, intact and able to germinate. The digestive system of horses benefits the other co-evolved fauna that also depend upon the sustainability of these grasses and plants for their sustenance. Fauna which benefit from wild horses reseeding plants and grasses include; deer and a host of other mammals, birds and even pollinators.

We also see mention of this wisdom in the Wild Free-Roaming Horse and Burro Act (WFRHBA) of 1971, where in regard to wild horses, Congress stated: “…they contribute to the diversity of life forms within the Nation…”

The BLM is spending approximately $150-million annually to round-up wild horses and feed them grass in taxpayer funded captivity.

Are these $-millions in spending the motive for ignoring science and logic?

Incredibly, we now have more ‘wild’ horses in captivity than in the wilds of America.

Wild horses that have been rounded-up the BLM (and USFS), have been branded and placed into expensive taxpayer-funded confinement by the BLM, and are now non-breeding animals (genetically molested by the BLM; sterilized).

As disturbing as this mismanagement of wild horses is, the 65,000+ wild horses currently being held in confinement by the BLM remain extremely useful in cost-effectively reducing wildfire fuels, and can do so year-round if properly rewilded into remote wilderness areas that are both ecologically and economically appropriate.

It also makes sense to humanely (as family units) relocate wild horses away from areas where they are deemed to be in conflict with commercial enterprises, deploying them into remote critical and designated wilderness areas where they can remain wild and free and engage in wildfire fuels reductions that protect forests and wildlife.

It’s important to understand that wild horses are immediately available to all government authorities (cities, counties and states) from the BLM under the ‘Humane Transfer of Excess Animals Act’ (H.R. 1625). These horses could be sourced from taxpayer-funded off-range holding facilities managed by the Bureau of Land Management (‘BLM’).

Upon transfer of wild horses under this existing law (H.R. 1625), these horses are provided with protections for their health, safety and welfare, and become ‘work animals’ (under definition of the Act).

Then, as is the current case with livestock, these horses can be deployed through cooperative wildfire grazing agreements (already being done with cattle and sheep on some USFS lands) into ecologically and economically appropriate remote wilderness areas that are at grave risk from catastrophic wildfire.